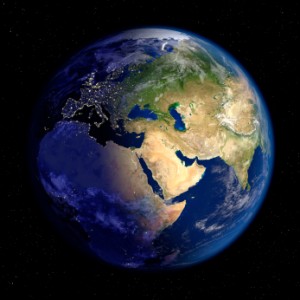 April 22 is Earth Day, a day each year when we focus on the need to preserve our natural environment. Besides being encouraged to gather at pro-environment rallies, such as the one that takes place each year on the National Mall in Washington DC, people are urged to take small, yet positive actions to help save the earth. Today, social media and Internet technologies have taken environmental advocacy to another level.

The Earth Day Network website, for example, (http://act.earthday.org) enables individuals to collectively perform “One Billion Acts of Green”– each person committing to one “Green” act, whether that means biking to work instead of driving, planting a garden, or turning off the water when brushing your teeth.

While I do believe these acts are commendable, I also hope that they don’t lead people to sit back with great pride and self-adoration, thinking they’ve done their part. I firmly believe that conservation alone will do little to save our planet!

Why? Sheer numbers for one. While our planet’s resources are finite, there are more of us than ever before. Last October, the United Nations estimated that the world’s population had reached roughly seven billion, and said that the number is projected to continue to soar to 8 billion by 2027.

At current population levels, we already face near-and long-term shortages in critical, life-sustaining resources such as potable water, oil, food, basic commodities and medications, not to mention the looming climate crisis. Soon there will be an additional one billion people who need access to clean water, one billion more people who need medication, and one billion more people who will require fuels to cook, heat their homes and transport themselves. One billion more people who, if they live like the average American does today, will produce 4.4 pounds (2 kg) of garbage a day, or roughly 1,600 pounds (726 kg) a year, according to the U.S. Environmental Protection Agency. This does not include industrial waste either. All the conservation efforts in the world will have difficulty denting that.

I also see human nature itself as an obstacle. The moment that we humans gave up our hunter-gatherer existences for more settled communities, we began a quest to make our lives better and more comfortable, and we’ve been sucking precious and finite resources from our environment ever since.

To point out just a few examples, the Romans deforested much of Europe and the Middle East in their efforts to expand their empire. And archeologists believe that Native Americans who lived in cave dwellings in what is now New Mexico, centuries before it was settled by the Spanish, abandoned their dwellings after the land they chose to cultivate could no longer support their numbers.  Indeed, few human civilizations appear to have had the foresight to preserve their surroundings in their drive to be the most successful species on this planet.

If this appears to be a dark view of humankind, so be it. However, I do also believe that there is an enormous opportunity to tap into another deeply engrained human instinct to fix the very serious environmental and natural resource crises that we face today. And that instinct lies squarely around our deep-seeded urge to innovate.

Whether it was building the wheel, discovering how to make fire, inventing the printing press or finding a vaccine for polio, humans have always used their intelligence and creativity to improve our existence.

I believe that in this drive to innovate, which some may say has led to the very crises we face today, we can also find the solutions to address our planet’s most serious issues.  That could mean focusing on how we can turn our ocean waters into new sources of fresh water through desalination, development of synthetic bacteria to help clean up pollution or looking at ways to exploit potential resources from the moon.  The moon could also provide a location for astronauts to explore and prepare for deeper missions into space, where we could discover other resources for our planet.

While humans are creative, not all of us are entrepreneurs. Many people have good ideas, but only a small percentage of us have a vision and then execute on ideas that can propel us forward. That’s why I believe we need to put in place mechanisms to encourage our brightest minds to put their best efforts towards helping save our planet.

That’s one reason I serve as a trustee on the board and Co-Chairman of Education and Global Development of the X PRIZE Foundation, a US-based non-profit organization whose mission is to bring about radical breakthroughs in the areas of education, poverty, agriculture, health, and clean water.  “Somewhere in the world, someone will have the solution” is our motto. At X PRIZE, we believe in tapping into the human spirit of competition to drive advances, creating and managing large-scale, incentivized prize competitions to stimulate research and development in education & global development, energy & environment, life sciences and ocean and deep space exploration.

I sincerely believe that putting our collective financial, mental and ingenuity resources and into these efforts will bring us forward in addressing our environmental and finite resource concerns.  I say, go ahead and do your part to contribute on Earth Day.  And sure, turn off the water as you brush your teeth. Why not? But without seriously investing in our spirit of innovation to put solutions in place that directly solve the sustainability problems we face, I believe the long-term future of our planet is bleak at best.

What do you think?

Error: Twitter did not respond. Please wait a few minutes and refresh this page.