BELLEVUE, Wash.–Intelius, a leading provider of online services ranging from employment screening to consumer people searches, and the Southern California Committee for the Olympic Games (SCCOG) are proud to announce their support of the International Olympic Committee’s 5th World Conference on Women and Sport being held Feb. 16 – 18 in Los Angeles, California. SCCOG is the local organizing committee for the conference, which will host more than 750 participants from more than 130 countries, representing National Olympic Committees, international federations, non-government organizations, universities and other organizations with a goal of analyzing progress made within the Olympic Movement and identifying ways to improve and increase the participation of women in the world of sport.

Intelius will mark its commitment to empowering individuals around the world through the launch of its “Power of I” initiative and recognize outstanding achievements during its “Power of I: Celebrating Women and Sport” event on Feb. 17 at 7 p.m.

“Intelius, the International Olympic Committee and SCCOG share a commitment to achieving equal opportunities for women and girls the world over. The world’s largest challenges cannot be solved without empowering women from all backgrounds to recognize their full potential,” said Naveen Jain, CEO, Intelius. “We have made great strides to break down barriers, but more work needs to be done and we should not be satisfied until we reach complete equality.”

“This conference is great opportunity to join together and work cooperatively across borders, generations and organizations to improve and increase the participation of women in the world of sport,” said Anita DeFrantz, chair, IOC Women and Sport Commission. “We are excited to partner with Intelius for this important event, and thank them both for their support and commitment to this cause.”

During a celebration featuring three female Olympic champions and their inspirational stories, Jain will present Intelius’ “Power of I” awards to:

Michelle Kwan: A two-time Olympic medalist and Honorary Co-Chair of the International Olympic Committee’s World Conference on Women and Sport, Kwan was recently inducted into the U.S. Figure Skating Hall of Fame for her grace in the world of ice. Since retiring from skating she has embarked on a new career in public diplomacy, following her passion for connecting people by the things that unite them
Nadia Comaneci: A five-time Olympic gold medalist and the first female gymnast ever awarded a perfect score of 10 in an Olympic gymnastics event, Comaneci’s athletic accomplishments are legendary. Today she dedicates much of her time and talent to charity – sitting on the boards of directors for the International Special Olympics and the Muscular Dystrophy Association
Jennie Finch: A two-time Olympic medalist, Finch’s sporting accomplishments earned her the title of “the most famous softball player in history.” Off the mound, she is pitching in to support wounded military veterans and inspiring countless other girls and women who play for the love of the game.

“Intelius is honored to present the ‘Power of I’ award to Michelle, Nadia and Jennie for their outstanding achievements in figure skating, gymnastics, softball, diplomacy and philanthropy. All three of these women exemplify the power that exists within each of us to inspire others to overcome challenges and even to solve the world’s biggest problems,” said Jain. “We at Intelius call this our ‘Power of I.’ We recognize that the Internet has ushered in a new era providing each of us with incredible opportunities to use our stories to positively impact the world. And Intelius is on a mission to empower every individual to seize these opportunities through its ‘Power of I’ website, www.MyPowerofI.com.”

Intelius is in the business of providing information about people and empowering people through information. The company is a leading provider of online services ranging from employment screening to consumer people searches. Through its Power of I initiative and website, Intelius is committed to helping every individual use the Internet to realize the personal power they possess to change their own lives and their world. Led by Founder and CEO Naveen Jain and a team of experienced entrepreneurs, technologists, and Internet visionaries, Intelius is one of the top 100 most-trafficked sites on the Internet, according to comScore/Media Matrix. To learn more about Intelius, visit www.intelius.com/corp. To learn more about Power of I, visit www.MyPowerofI.com.

ABOUT THE SOUTHERN CALIFORNIA COMMITTEE FOR THE OLYMPIC GAMES

Formed in 1939, the SCCOG is a non-profit organization whose mission is to promote the Olympic Movement in Southern 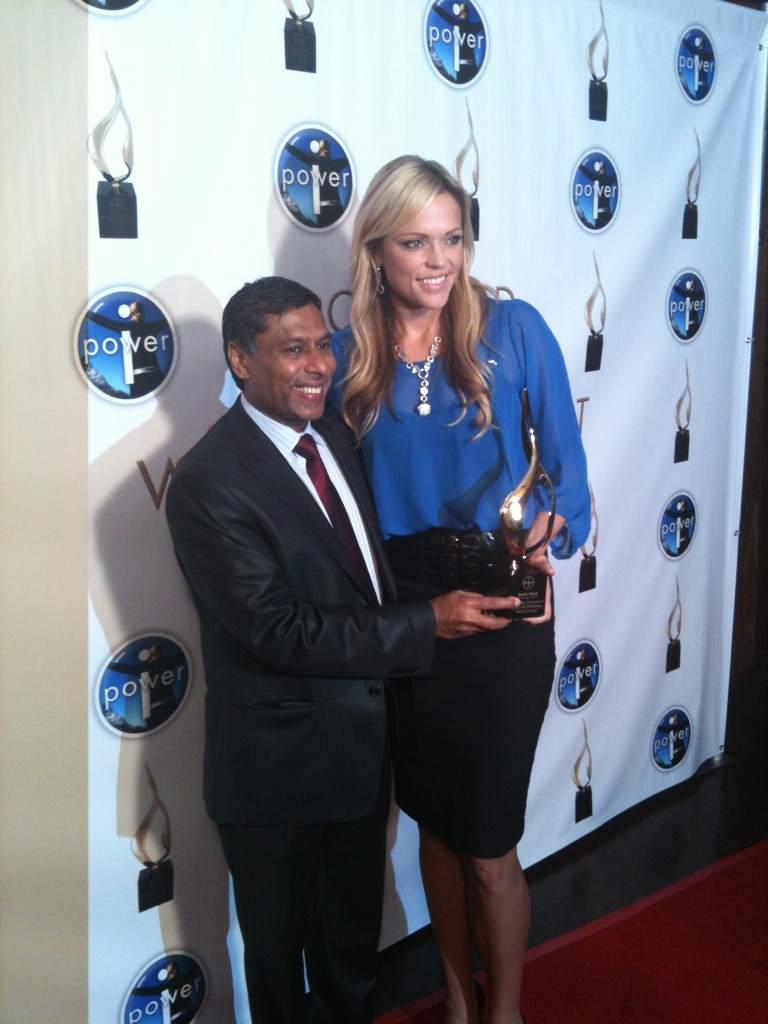 Naveen Jain Presents Jennie Finch with Power of I award

California. Its activities over the years have included numerous bids for the Olympic Games on behalf of and in conjunction with the City of Los Angeles, including the successful bid for the 1984 Olympic Games. Further information can found at www.sccog.org.

Error: Twitter did not respond. Please wait a few minutes and refresh this page.